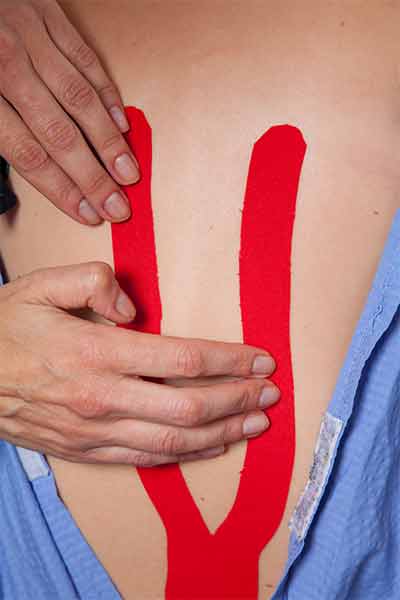 WHAT DOES IT DO?

Helping to return muscle function to normal: The main principle of application of Kinesio tape to aid muscle function is that the muscle is stretched rather than the tape.

Improving blood and lymphatic flow: The main principle of this powerful technique of a lymphatic fan application is to create a fan of Kinesio tape covering the area of inflamed tissue, the tape is put on with just a small amount of stretch to enhance drainage, often in the direction of a lymph node.  This is a very effective method and produces startling results.

Pain management and reduction: The principle factor in this technique is the high degree of stretch that is applied to the Kinesiology tape, this creates a strong lifting effect on the skin.  This helps to reduce pain and inflammation. The tape is stretched between 70 and 100% stretch but the skin/tissue is not pulled or stretched.

Fascial correction: The main principle of this technique is to create a gentle repositioning of the fascia to improve tissue and joint function.  This occurs because this technique alters the proprioceptive information sent by the skin and fascia. In this method the k-tape is applied with a stretch of between 25% and 50%.

Helping to reduce Joint and tissue dysfunction: The main principle behind this technique is creating a strong repositioning of tissues and structures. This is normally achieved by using 50-75% stretch on the K-tape.

The specialised tape that he eventually developed (Kinesio tape) had a texture and elasticity similar to living human skin, in comparison to the rigid sports tape he previously used which he found caused certain limitations when using it with his own patients.

Kinesio Tape is an elastic adhesive tape that does not restrict motion like conventional athletic tape.  It is used extensively by sports teams and athletes throughout the world.

Plymouth Kinesio taping services practitioners Kevin Kelly and Dr Elena Long both have a deep understanding of Kinesio-taping.  Elena long uses it together with Sports Massage and Mr Kelly uses it in conjunction with his Myofascial release and instrument assisted soft tissue mobilisation (IASTM).

The exact reason why Kinesio tape works so well is still being researched. Research indicates that the subtle lifting of the skin improves lymphatic drainage and blood perfusion causing reduced pain and inflammation and results in the dramatic changes associated with the very quick perfusion and warming of even chronically cold and poorly perfused tissues.

The abilty of Kinesio tape to alter the proprioceptive information from the skin and fascia is particularly interesting and is being augmented by the recent more deeper understanding of the importance of proprioception, particularly the role of the fascia in movement and it’s key role in providing proprioceptive information to the brain and hence it’s important influence in homeostatic control of muscle function. Advanced practitioners often combine the Kinesiotaping method with Myofascial release techniques.

Kinesio tape recieved international exposure for the first time in the Seoul Olympics in 1988 and is now ubiquitous being widely used by both professional and amateur athletes throughout the World.

Kinesio and other kinesiology tapes including Levotape have been used in sporting events such as the Tour de France, The FA Premiership, Wimbledon.  The Rugby Football World Cups and the London 2012 Olympic Games. Plymouth Kinesio Taping Services use Levotape primarily for our treatments. 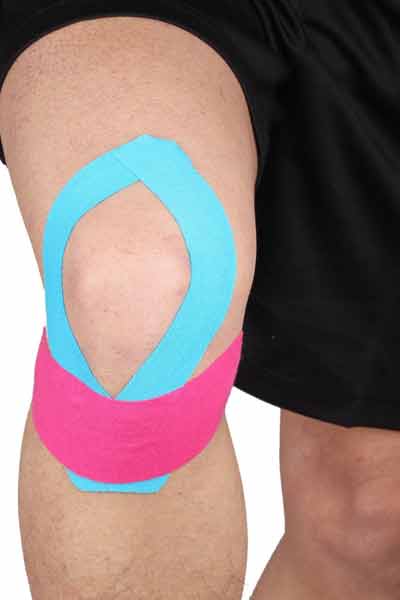 Fascial taping is used to increase joint range of motion and reduce pain, the patient’s joint / injured area is examined and the best directions to apply the tape is determined with specific movements of the joint and surrounding tissues. After the tape is applied there is normally an instantaneous improvement in the movement and / or reduction in joint pain.

The method reduces the severity of pain in the injured joint allowing a less painful joint motion enabling the patient to perform previously painful activities which may have further injured the damaged area, the altered tissue positioning and altered tissue and joint proprioceptive information allows a quicker healing as the stresses on the injured tissues and joint are reduced.

In the 1970’s Dr. Kenso Kase a Japanese chiropractor did some research to try and develop a tape that would help to repair injured and traumatised tissues.
His research and clinical observations showed that joint pain was often caused by the abnormal function of muscles and myofascial tissues around joints instead of from the joint itself.

The specialised tape that he eventually developed (Kinesio tape) had a texture and elasticity similar to living human skin, in comparison to the rigid sports tape he previously used which he found caused certain limitations when using it with his own patients.

This website uses cookies to improve your experience while you navigate through the website. Out of these, the cookies that are categorized as necessary are stored on your browser as they are essential for the working of basic functionalities of the website. We also use third-party cookies that help us analyze and understand how you use this website. These cookies will be stored in your browser only with your consent. You also have the option to opt-out of these cookies. But opting out of some of these cookies may affect your browsing experience.
Necessary Always Enabled

Any cookies that may not be particularly necessary for the website to function and is used specifically to collect user personal data via analytics, ads, other embedded contents are termed as non-necessary cookies. It is mandatory to procure user consent prior to running these cookies on your website.