IASTM AND THE DEVELOPMENT OF THE MYOFASCIAL CORRECTION SYSTEM

IASTM AND THE DEVELOPMENT OF THE MYOFASCIAL CORRECTION SYSTEM

In recent years the importance of the myofascial systems role in injury has become better understood. Some of the pain attributed to joint or ligamentous pain is now understood to come from dysfunctioning fascia. Fascia is the connective tissue that surrounds every muscle, ligament, organ and bone, it is interconnected and forms a continuous network throughout the body.

He has developed two specially designed instruments, one an IASTM instrument and the other a myofascial correction bar. The treatment protocols he has developed produce a very effective instrumented myofascial tissue release together with an Instrument Assisted Soft Tissue Mobilisation (IASTM) system which has two fundamental differences from conventional IASTM treatments. These differences are explained and elaborated on in his courses and seminars.

These instruments were developed from an ergonomic perspective, that is their function determined their form. The video below shows the instrument design and ergonomic considerations making them, these considerations and the treatment protocols he developed make the Myofascial Correction system so effective. 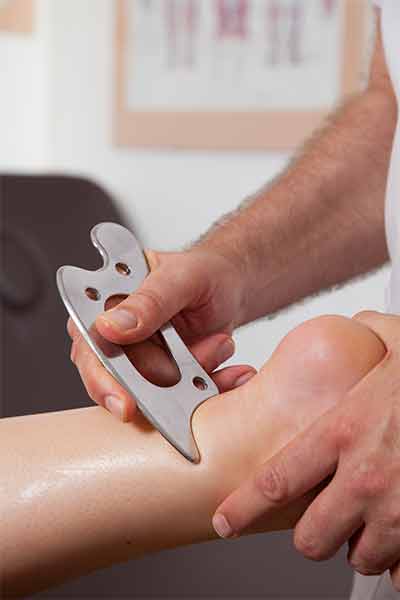