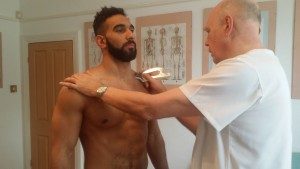 Plymouth Albion RFC player Gregory Sebastien at Peverell Chiropractic Clinic having Chiropractic treatment and Myofascial Correction for injuries sustained from a high tackle last week, had the tackle been higher it would have been the neck and face that was injured. After treatment the players injuries were taped up to reduce the stress on the injured tissues and promote a speedy recovery.

In recent years the size and power of Rugby players has meant that rugby tackles (now called collisions as severe examples are more akin to milder road traffic collisions) can cause considerable trauma and injury to even the fittest and strongest players. 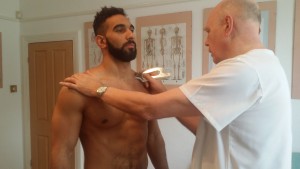 Forty years ago the average Rugby back row was a lot smaller than now.  There would be one or two players in a team who were massive with great thick necks and a huge bone structure, now at least half of teams have players with this type of physique.  Just looking at it from our armchairs they appear to be getting bigger and bigger, and a recent study by CNN please check this link for great infographic has confirmed it.  This study into the New Zealand backs showed that in 1974 the average New Zealand back (one full back, one centre back and one winger) was 5 feet 10 inches and weighing 84 Kg.  The infographic illustrates other sports and we can see that the size increase is across the sporting board.  Diet and as previously mentioned strength and conditioning plays an important role today.

In 2014 they averaged 6 feet 2 inches in height and weighed 98Kg.  A massive difference in weight.  40 years ago strength and conditioning didn’t play the major role in sports it does now.

Players are now much stronger with greater explosive power than previously another factor which increases of force of tackles and the likelihood of injury.